For our Primary 1 and 1/2 pupils at Ravenswood Primary School, play is the way, all day, every day. We enter our school building, take our jackets off, put down our school bags and get to work for the day…playing, of course! Our children truly are play champions! They fully understand the need for play, the benefits of learning through play and are not shy in sharing their opinions on this. If there is one thing that Ravenswood Primary School does very well, it is helping to instil confidence in our pupils to stand up for what they believe in, and our Primary 1 and 1/2s stand up for play, every day.

Standing up for children’s rights 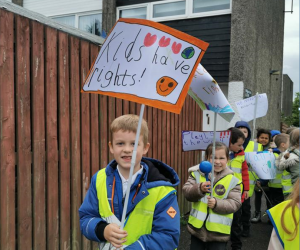 Celebrating the Year of Childhood during our final term of school opened up many discussions and learning opportunities based around children’s rights. One right they were hugely familiar with was their right to play – they knew this well and assumed every child had the same schooling experience as they did.

It wasn’t until one girl shared with the class that her friend, who attended another school, didn’t get to play that they realised there was a play injustice: “She sits on a chair a lot because she has a desk. I think they just get play one day.” Cue the gasps from a sea of Primary 1 and 1/2 children, dramatic facial expressions with lots of raised voices and statements exclaiming how unjust they thought this was.

“It is their right!”

“But Nicola said it’s the law…”

And a beautifully put comment about sore bottoms: ”Their bums will just go to sleep if they sit all day!”

Our Primary 1 and 1/2s had a great understanding of our ‘play is the way’ message and knew that it wasn’t only their right, but as of March 2021, this right, along with the other 41 child’s rights stated in the UNCRC would soon be protected by Scots Law. In their minds, ‘not learning through play’ wasn’t just an injustice – it was a breach of Nicola Sturgeon’s law! The discussions and stories about other children’s school experiences grew and it came to their attention that not being given the right to play at school was perhaps a little more common than they had originally thought. 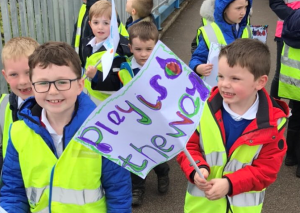 For our pupils, play is the natural way to learn and they could not understand why this wasn’t the case for all children. They were so dumbfounded by the fact that many adults and teachers did not know how great play was, and more so by the fact that not all children were being giving this right. One morning after showing the class an image of a demonstration linked to the Children’s Parliament, this triggered a ‘lightbulb moment’ in our pupils. They decided that they wanted to organise their own demonstration to inform adults about the importance of play and to help more children experience learning through play, as one boy pointed out, “…even as a big kid in P7.”

Spreading the word that Play is the Way 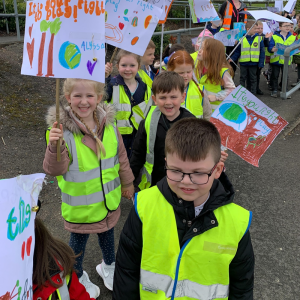 They now had fire in their tummies and they were ready to put on their play war paint! They were so unbelievably excited by the notion that they could make their voice heard, be listened to and help to bring about change. They felt truly empowered and couldn’t wait to share their ‘play is the way’ message far and wide.

The children decided to make signs, as this is what had captured their attention in the original image from the Children’s Parliament. Their signs boasted hard hitting messages about the right to play and why children need play. The children required no support or guidance with this, they were fully versed in the importance of play and at this point they firmly believed that it was their job to educate others. Their signs had to be big, bright and bold.

They decided that they would also need instruments to ensure that they captured the public’s attention, “The adults need to know we are here. If we make noise they will look at us and read our signs.” Their logical, deep thinking and self-directed learning was remarkable – some might argue the very result of having experienced learning through play for the first years of their school career. They were truly invested in making sure the adults listened to what they had to say. Cumbernauld didn’t know what was coming… 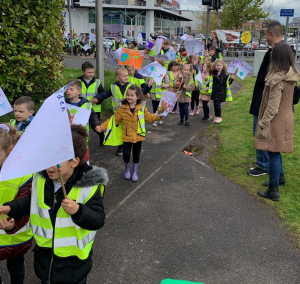 Armed with their signs, instruments and favourite chant, “Play is the way, play is the way!” they took to the streets of our local area and made their voices heard. Imagine almost fifty 5-6 year olds standing up for their right to play, beaming with pride, holding their signs high, stopping the public in their tracks, teaching them about the importance of play, answering questions and leading change for the wellbeing of all children.

Their demonstration lasted almost an hour and a half but their passion for play has the potential to last their entire school career. They have the knowledge, the play experiences, the confidence and the desire to ensure that they are given their right to play at home and at school. 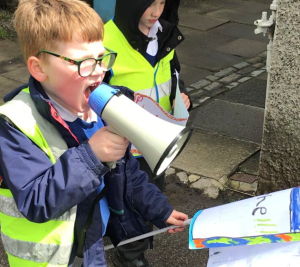 Since our demonstration, our Primary 1 and 1/2s have continued to share their ‘play is the way’ message with school staff, family members and even with our older children who now receive ‘play parcels’ in the form of toys hand delivered to their classroom – “Play isn’t just for P1, you’re a child for a long time.” Our children see it as their mission to stop teachers in our school to remind them about the fact that play is their right, and more importantly in their eyes, Nicola is making it the law!

We know our pupils’ future is bright because they understand that their future should be playful. Pupil empowerment coupled with knowledge, joy and passion can and will result in big changes from our littlest people. Bring on the play power! 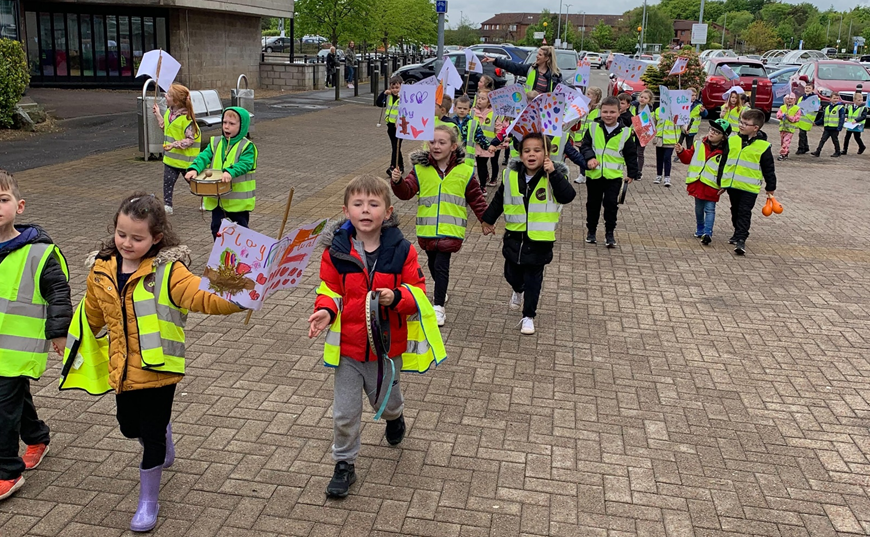