Until October 2015 (The Gift of Time: school starting age and mental health) there didn’t appear to be any research into the relative effectiveness of different kindergarten systems or the optimum length of attendance at kindergarten. Just like the UK, countries around the world take their school starting age for granted and, since pre­school education is not usually mandatory, little attention has been paid internationally to the contribution of particular pre­school systems to children’s educational success (or failure).

The case for Upstart is therefore based on research from a range of related areas, including:

(Click on each  of these bullet points for a selection of key references.)

In June 2015, these strands of evidence were brought together in a book – Upstart: the case for raising the school starting age and providing what the under-sevens really need by Sue Palmer (Floris Books).

Ever since international PISA comparisons began, countries with later school starting ages have performed better than those with early starting ages.  Finland, which has a world-renowned play-based kindergarten stage for three- to seven-year-olds, has always been among the highest scoring nations.

The most recent PISA results were published in December 2016. 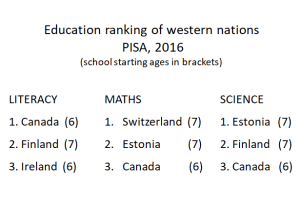 In the UK, considerable investment in formal schooling over the last decade has not narrowed the attainment gap.

In the second, the UK had made a little progress but is still severely out-ranked by other European countries, all of which have a later school starting age: UNICEF. ‘Child well-being in rich countries: a comparative overview’. Florence: UNICEF 2013

The Scottish Survey of Literacy and Numeracy has reported falling standards in the three Rs in recent years, specifically among disadvantaged pupils.

The significance of play (including outdoor play

7. For evidence about the importance of outdoor play, see: http://www.englishoutdoorcouncil.org/research.in.outdoor.learning.html and Outdoor education, lifelong learning and skills development in woodland and green spaces: the potencial links to health and well-being by O’Brien L et al, 2011

8.   In terms of ‘readiness for education’ play’s contribution to children’s self-regulation skills is particularly important.  See ‘Play and Self Regulation‘ in The American Journal of Play, Autumn 2013 by E Bodrova et al. Since then, there has been a further study, ‘Less-structured time in children’s daily lives predicts self-directed executive functioning’ JE Barker, AD Semenov et al Frontiers in Psychology, 17-6-14
9.   ‘On ‘becoming social’: the importance of collaborative free play in childhood‘ by  P Jarvis, S Newman and L Swiniarski International Journal of Play, 2014)

There are of our knowledge NO longitudinal studies showing that an early start on formal education confers a long-term advantage.  The following research – which indicates that it is counter-productive –  is from early-start English-speaking countries:

David Weikhart, the researcher, describes the project on this powerful video clip:

4.‘Pathways to Reading: The Role of Oral Language in the Transition to Reading‘ by the National Institute of Child Health and Development’s Early Child Care Research Network in Developmental Psychology, 2005. This concluded that  ‘environments rich in language stimulation and conversation will not only build general language skills but will also have the positive consequence of supplementing vocabulary and metalinguistic skills’. The reverse is not necessarily true. That is, simply teaching vocabulary and phonemic awareness, although perhaps necessary, would not be sufficient to buttress general language skills.
5. ‘School Readiness: Integration of Cognition and Emotion in a Neurobiological Conceptualization of Child Functioning at School Entry‘ by C Blair in American Psychologist 57, (2002)  US research review
6. ‘The effect of school entrance age on academic achievement and social-emotional and emotional adjustment of children‘ by Brenitz Z and Teltsch T in Psychology in the Schools, 1989
7. See also an article by one of the USA’s most respected developmental psychologists, Alison Gopnik: Why Preschool Shouldn’t Be Like School, www.slate.com, 2011
8. Lively Minds: distinctions between intellectual and academic goals for young children by Lillian C Katz, University of Illinois (DEY, 2015)
9.  ‘Early Social and Emotional Functioning and Public Health: the relationship between kindergarten social competence and future wellness’ by Damon E Jones PhD et al in American Journal of Public Health, online July 15th 2015 showed that, in a twenty year study, teacher-rated social competence in kindergarten [age 5] was a consistent and significant indicator of both positive and negative future outcomes across all major domains: education, employment, criminal justice, substance use and mental health.
(On the same day the BBC reported a survey of 1,180 UK head teachers, in which 66% rated pupils’ mental health as a major concern.)
10. The Gift of Time: school starting age and mental health by T Dee and S Sievertsen  (National Bureau for Economic Research, October 2015). A follow-up report in 2018 showed that the benefits of delaying formal schooling had persisted until age 11.

Many Scottish children start school with inadequate language skills. The research listed here, combined with the studies in the previous sentence, suggests that expecting them to read and write at four or five is (a) counterproductive and (b) unnecessary – see (5) and (6).