The Fife Upstart hustings “Was one of the most enlightening hustings I have ever been to.” said Willie Rennie, Leader of the Liberal Democrats in Scotland at Elmwood College, Cupar Wednesday night.

The meeting, attended by more than a hundred people, heard teachers, parents and mental health workers who overwhelmed the Scottish Parliamentary candidates with their passion, despair and frustration for Scottish children’s early years experience.

Upstart Scotland Campaign Leader Sue Palmer, author of ‘Toxic Childhood: How the Modern World is damaging our Children and what we can do about it’, said: “Scottish teenagers are the most stressed in Western World.” (The Herald March 15th.) She said: “We need a change of ethos in our primary schools.”

The growing movement, which has nine local networks of enthusiastic supporters right across Scotland even before its national launch in May, argues that to help Scotland’s children gain their full potential and avoid teenage mental health problems they need more time for free play in their early years.

At last night’s hustings, which was prompted by an augural meeting of Upstart Fife in Collesse village Hall in February Scottish Liberal Democrat Leader Willie Rennie, was joined on a panel by SNP Candidate Alycia Hayes, Scottish Conservative Candidate Martin Laidlaw, Andy Collins of the Scottish Green Party’s and Scottish Labour Candidate Rosalind Garton. The panel, which was chaired by award winning journalist and broadcaster, Lesley Riddoch, heard how children’s creativity and imagination was coming second to a need for ‘box  ticking‘ and constant assessment. One newly qualified primary school teacher described how alongside The Curriculum Excellence, a policy which encourages more free play and access to the outdoors, there is Assessment for Excellence which sees children ‘tested’ in Primary One. She said that in her job she was constantly making her own assessment of the children so did not see why a test was needed too. “Why are our assessments not trusted?” she said. “I feel so frustrated” 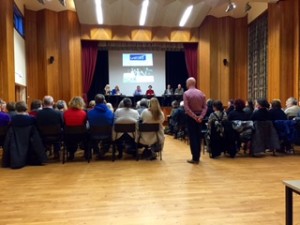 SNP candidate Alycia Hayes came under fire for the Government’s policies on testing and assessment. She agreed that change was needed: “We have a job of work to do. We have to change direction if that is what our teachers are saying.”

“I have not seen a test that could effectively test creativity or imagination,” said Scottish Labour Candidate Rosalind Garton. While Willie Rennie said that he thought the SNP would regret testing in Primary Schools.

Scottish Conservative Candidate Martin Laidlaw said that he thought the system needed re-structuring but did not advocate changing the school starting age.

Child Psychologist Sarah Hume said: “Schools do not value childhood in the way that we experience it as a parent.” But she added: “Schools are under a lot of pressure.”

The Fife branch of Upstart Scotland is part of the campaign to change the school starting age in Scotland to seven. It is demanding a change in early years education through the introduction of a state-funded kindergarten stage for Scottish children aged three to seven with an emphasis on the outdoors.

Children in countries such as Finland, which has the best education results in Europe, don’t start formal schooling until seven. They have a state-funded kindergarten stage from three with an emphasis on the outdoors and as a result their young people do better in school.

To find out more see the group’s website: http://www.upstart.scot/ or their Facebook Page: https://www.facebook.com/upstartscotland/ or email info@upstart.scot.